☛This page includes Biblical and Byzantine Greek, and Modern (polytonic) Greek from the nineteenth century.

A Greek Grammar, and Greek and English Scripture Lexicon, containing all the words which occur in the Septuagint and Apocrypha, as well as in the New Testament. By Greville Ewing, 1812.

Greek Grammar, translated from the German of Philipp Buttmann, by Edward Everett, 1822. 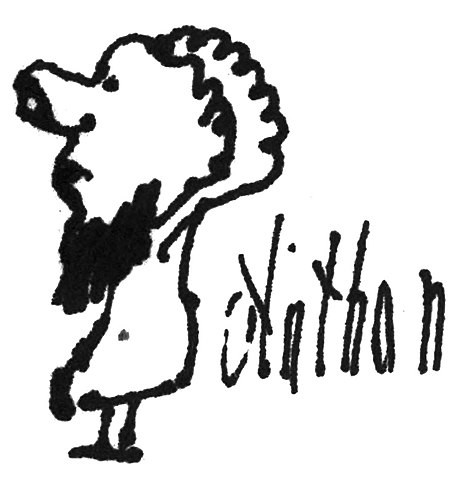 A portrait of Charles Anthon by one of his students.

A Grammar of the Greek Language, for the use of schools and colleges. By Charles Anthon, LL.D. New-York: Harper & Brothers, 1838.
1856 edition.

“Omitting nothing that is contained in the most voluminous and cumbrous works of the German school, it is so clear in its arrangements, so perfectly simple and comprehensible in its explanations, that we have no hesitation in saying, that, by the use of this little volume, almost as much might be acquired of the Greek tongue, without the aid of oral exposition, as from any other work in circulation, assisted by an able and experienced tutor. On its peculiar excellences, our limits prohibit us from enlarging to the extent we could desire; but in a few words, we can touch upon its most marked points of superiority, which we conceive to be first, the great simplification and plainness of its rules, whether for verbal formations, or for syntactical arrangement—secondly, the full and extended manner in which the declensions and conjugations are carried out, leaving nothing to be guessed at, or misapprehended—and lastly, though not leastly, the cutting down of those redundant and embarrassing superfluities with which all previous books of this nature abound.—It is emphatically an excellent school book! Indeed, we do not see how it could be improved; and anxious as we are to see a high degree of education and general literary habits diffused through the vast territories of our country, we trust that—as one of the most probable steps toward this result—this work may be universally adopted in every school and college of America.” ——The New-York Review, October, 1838.

A Grammar of the Greek Language, principally from the German of Kühner, with selections from Matthiæ, Buttmann, Thiersch, and Rost. For the use of schools and colleges. By Charles Anthon, LL.D. New-York: Harper & Brothers, 1844.

“The very favorable reception extended to the author’s previous grammar of the Greek language, and the urgent solicitations of many valued friends, have induced him to present the same work in a more enlarged and complete form. His object has been to furnish the student with a general view of the leading features of Greek philology, and to place in his hands a volume that may prove a useful auxiliary to him throughout the whole of his academic and collegiate career. In order to effect this more thoroughly, recourse has been had to the writings of the latest and best of the German grammarians, and especially to those of Kühner, which are now justly regarded as the ablest of their kind.” [The previous smaller grammar continued in print, however; see above.]

A Greek Grammar: for the Use of Learners, by Evangelinus Apostolides Sophocles, 1843.

A Complete Greek Grammar for the Use of Students, by John William Donaldson, 1862. —Quite extensive.

A Greek Grammar for Colleges, by Herbert Weir Smyth, 1920.

An Introduction to the Comparative Grammar of Greek and Latin, by John Edward King and Christopher Cookson, 1890.

A Practical Introduction to Greek Accentuation, by Henry William Chandler, 1862.

An Elementary Greek Grammar, by William Watson Goodwin, 1873. —An early edition of Goodwin, possibly better for students since it isn't quite so bloated.

An Historical Greek Grammar: Chiefly of the Attic Dialect as Written and Spoken from Classical Antiquity Down to the Present Time; founded upon ancient texts, inscriptions, papyri, and present popular Greek. By Antonius Nicholas Jannaris, 1897.

A Short Introduction to the Greek Language, 1815.

An Introduction to Greek Grammar on a New Plan, by Thomas Foster Barham, 1829.

An Easy Introduction to the Greek Tongue for the Use of Junior Classes, 1837.

An Introduction to the Knowledge of Greek Grammar, by Samuel B. Wylie, 1838.

An Introduction to the Greek Language, By Asahel Clark Kendrick, 1841.

First Lessons in Greek, Introductory to the Greek Grammar, by Rev. Peter Bullions, 1854.

A Short Introduction to the Writing of Greek, by George Isaac Huntingford, 1786.

Greek Exercises; or, An Introduction to Greek Composition, by Francis Edward Jackson Valpy, 1831.

An Introduction to Greek Prose Composition: For Use in Preparatory Schools and the Lower Forms of Public Schools, by Horace Pitman, 1899.

An Introduction to Greek Verse Composition, by Arther Sidgwick and F. D. Morice, 1883.

An Introduction to Greek Epigraphy.

Part I: The Archaic Inscriptions and the Greek Alphabet, by Ernest Stewart Roberts, 1887.

Part II: The Inscriptions of Attica, by E. S. Roberts and E. A. Gardner.

An Introduction to Greek and Latin Palaeography, by Sir Edward Maunde Thompson, 1907.

A Greek-English Lexicon: Based on the German Work of Francis Passow. By Henry George Liddell, Robert Scott, 1875. —The biggest and best Greek lexicon in English, though not the latest edition, and in a very legible scan.
1889 (seventh) edition at archive.org.
1897 (eighth) edition at archive.org. —This is the latest edition in the public domain. There is a ninth edition, which is still in print today; Liddell and Scott has never been superseded.

A Greek Grammar, and Greek and English Scripture Lexicon, containing all the words which occur in the Septuagint and Apocrypha, as well as in the New Testament. By Greville Ewing, 1812.

Schrevelius' Greek Lexicon translated into English; to which is added a copious English and Greek Lexicon, edited by the Rev. J. R. Major, 1831.

A Comprehensive Lexicon of the Greek Language, adapted to the use of colleges and schools in the United States. By John Pickering. Third edition. Boston: Wilson, Carter, and Company, 1846. Larger than any on this list but Liddell and Scott.

A New Greek and English Lexicon, Principally on the Plan of the Greek and German Lexicon of Schneider. By James Donnegan. First American, from the second London edition, revised and enlarged by R. B. Patton. Boston: Hilliard, Gray & Co., 1832. —Copious and comprehensive; good for a second opinion after Liddell & Scott. (I use my paper copy often.) Interesting that two large Greek lexicons were printed in Boston in the year 1832, apparently by the same or related publishers.

A New Greek and English, and English and Greek Lexicon, by George Dunbar. Edinburgh: MacLachlan, Stewart, and Co., 1840. —The Greek-English part is fairly copious.

A Lexicon of the Greek Language: For the Use of Colleges and Schools; containing a Greek-English Lexicon and an English-Greek Lexicon. To which is prefixed a concise grammar of the Greek language. By the Rev. John Allen Giles, 1840.

A Greek-English Lexicon of the New Testament, by Joseph Henry Thayer, 1886.

A Manual Greek Lexicon of the New Testament, by George Abbott-Smith, 1922.

Schrevelius' Greek Lexicon translated into English; to which is added a copious English and Greek Lexicon, edited by the Rev. J. R. Major, 1831.

An English-Greek Lexicon. By C. D. Yonge. With many new articles, an appendix of proper names, and Pillon’s Greek synonyms. To which is added an essay on the order of words in Attic Greek prose by Charles Shot, LL.D. Edited by Henry Drisler. New York: Harper & Brothers, 1893.

An English-Greek Lexicon: Containing All the Words in General Use with Their Various Significations Classified. By Henry R. Hamilton.

A Manual of Greek Literature, from the earliest authentic periods to the close of the Byzantine era. New York: Harper & Brothers, 1853.
Another copy.
Another copy.

Introduction to the Study of the Greek Dialects, by Carl Darling Buck. Boston, New York, Chicago, London: Ginn and Company, 1910.
Another copy.

A Grammar of the New Testament Greek. By Alexander Buttman. Authorized translation, with numerous additions and corrections by the author. Andover: Warren F. Draper, 1891 (copyright entered 1873).

An Introduction to the Greek of the New Testament, by George Lovell Cary, 1881.

Handbook to the Grammar of the Greek Testament. Together with a complete vocabulary, and an examination of the chief New Testament synonyms. Illustrated by numerous examples and comments. [By Samuel G. Green.] London: The Religious Tract Society, [1876].

A Grammar of the Greek New Testament in the Light of Historical Research, by A. T. Robertson, M.A., D.D., LL.D., Litt.D. Fourth edition. New York: Hodder & Stoughton, 1923. —1454 + lxxxvi numbered pages. “The Fourth Edition is a reprint of the Third with the correction of a few errata that remained.”
At Google Books.
Third edition, 1919.

A Greek Grammar to the New Testament, and to the common or Hellenic diction of the later Greek writers: arranged as a supplement to Dr. Philip Buttman’s “Intermediate or Larger Greek Grammar.” By the Rev. Wm. Trollope, M.A. London: Whittaker & Co., 1842.

A Greek Grammar of the New Testament. Translated from the German of Georg Benedict Winer, by Moses Stuart and Edward Robinson. Andover: Codman Press, 1825.

A Grammar of the New Testament Diction: intended as an introduction to the critical study of the Greek New Testament. By Dr George Benedict Winer. Translated from the sixth enlarged and improved edition of the original, by Edward Masson, M.A. Edinburgh: T. & T. Clark, 1861.

The Analytical Greek Lexicon: consisting of an alphabetical arrangement of every occurring inflexion of every word contained in the Greek New Testament Scriptures, with a grammatical analysis of each word, and lexicographical illustration of the meanings. A complete set of paradigms, with grammatical remarks and explanations. London: Samuel Bagster and Sons Limited, [1870].

“In addition to the ordinary contents of a Greek-English Lexicon, with the meanings classified according to their derivation, its distinguishing feature is, that every word of the New Testament, exactly as it stands in the original text, however inflected or declined, is here set down in precise Alphabetical order, with a complete grammatical Analysis and indication of its root, so that the entire elucidation of whatever difficulty may occur can instantly be found without any further search or trouble.”

A Greek and English Lexicon to the New Testament: in which the words and phrases occurring in those sacred books are distinctly explained… To this work is added, a plain and easy Greek grammar, adapted to the use of learners, and those who understand no other language than English. By John Parkhurst, M.A. A new edition, by Hugh James Rose, B.D. London: [large consortium of booksellers], 1829.

A Greek Lexicon of the New Testament, on the basis of Dr. Robinson’s; designed for junior students in divinity, and the higher classes in schools. By Charles Robson. London: Whittaker and Co., 1839.

An Historical Greek Grammar: Chiefly of the Attic Dialect as Written and Spoken from Classical Antiquity Down to the Present Time; founded upon ancient texts, inscriptions, papyri, and present popular Greek. By Antonius Nicholas Jannaris, 1897.

A Modern Greek and English Lexicon: To which is Prefixed an Epitome of Modern Greek Grammar. By the Rev. Isaak Lowndes. Corfu, 1837.